New Jersey Among States Where Police Use Photo Databases

Few, if any, guidelines are in place to guard against abuse of massive photo databases that authorities nationwide have been compiling in recent years. 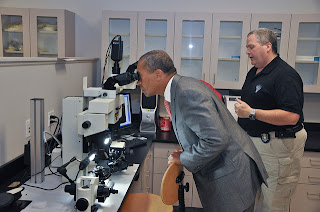 The faces of more than 120 million people are contained in photo databases that police are increasingly relying on to help them identify suspects, witnesses and other bystanders.
Databases Began To Curb Fraud
The databases originally began as a way for state officials to prevent driver’s license fraud but law enforcement officials have been diligently adding to it in recent years with little legal oversight, other than the requirement that searches be done for “law enforcement purposes,” according to a report in the Washington Post.
The photo databases are one of several technologically advanced tools used by law enforcement to help them solve crimes, but that also raise important questions about privacy and an individual’s Fourth Amendment rights which guard against unreasonable searches.
Crime-fighting Efforts vs. Fourth Amendment
Just a few weeks ago, the Supreme Court cleared the way for law enforcement officials to collect DNA samples from suspects they arrest for investigation of serious crimes. As it turns out, many state officials were already compiling their own statewide DNA sample databases to help them in their crime-fighting efforts. These have all come to light just as we have now discovered that the National Security Agency has been aiming some of its top-secret surveillance programs on ordinary Americans.
The photo databases used by authorities employs facial recognition technology that relies on characteristics such as skin texture and vein patterns to identify potential matches. The technology is not yet advanced enough to produce a definitive match with the same accuracy as a fingerprint or DNA sample, but helps law enforcement ferret out potential suspects.
Where Photos Come From
Photos contained in the database primarily come from states’ driver’s license photo banks, which began as a way for authorities to curb identity fraud. The Washington Post found that 37 states use facial recognition technology in their driver’s license registries, with at least 26 of those allow law enforcement agencies to search or request searches.
New Jersey is one of those, with six million images in its database.
Potential Police State?
Laura Donohue, a Georgetown University law professor who has researched government facial databases is concerned about the use of these photo databases.
“As a society, do we want to have total surveillance? Do we want to give the government the ability to identify individuals wherever they are . . . without any immediate probable cause?” Donoghue said to the Washington Post. “A police state is exactly what this turns into if everybody who drives has to lodge their information with the police.”
Photo credit: Deval Patrick