According to the American Animal Hospital Association (AAHA), nearly five million people are bitten by dogs in the U.S. every year, many of them children bitten by pets. Dog bites can cause severe puncture wounds and lacerations, and even serious tissue and nerve damage if the bite is deep enough, and transmit diseases including rabies.

In most personal injury cases, the onus is on the person who brings the lawsuit to prove that the defendant’s negligent acts caused them measurable harm. Dog bite cases are among the few exceptions. Dog owners in New Jersey are subject to strict liability for bite injuries caused by their dogs, which means that the bite victim doesn’t have to prove the owner neglected to use reasonable care to successfully sue for damages in most instances.

New Jersey Statutes section 4:19-16 imposes automatic liability on the dog’s owner 1) when the person bitten is in a public place or lawfully in a private place, 2) regardless of any prior aggression by the dog or its owner’s knowledge of it. The owner is liable even if he or she took reasonable steps to leash or restrain the dog and even if it has never bitten or hurt anyone before.

END_OF_DOCUMENT_TOKEN_TO_BE_REPLACED

Eighteen New Jersey medical professionals have faced legal trouble during the past year due to reasons such as opioid, sex, fraud, or stabbing charges involving patients. Some of these cases include a registered nurse who stabbed a 10-year old autistic child with a needle when he was behaving disruptively. The nurse, Naomi Derrick of Sicklerville, supposedly threatened the autistic child with a needle while he was being hospitalized in an Atlantic City psychiatric unit.

According to reports from the Office of Attorney General, Derrick stabbed the child at least six times throughout the duration of the 12 hour shift. Derrick’s conduct was recorded using a security camera found in the room, which revealed footage of her stabbing the child on his “upper arm, thigh, kneecaps, [and] foot and hand” resulting in an accumulation of blood droplets. Derrick claims she did not actually stab the child, but did admit to using the needle as a threat to encourage good behavior.

Other cases of poor ethics in the New Jersey medical community include individuals who have been accused of taking bribes, such as the case of a Bergen County pharmacist, Eduard Shtindler, who is charged with conspiracy for health care fraud. Shtindler supposedly paid kickbacks to a Hudson County based psychiatrist in order to provoke the doctor to direct his patients to the pharmacy that Shtindler owns in West New York. This scheme resulted in nearly $3 million worth of medications prescribed by the doctor which were filled by Shtindler’s pharmacy.

END_OF_DOCUMENT_TOKEN_TO_BE_REPLACED

New Jersey governor Phil Murphy recently passed a lawthat erases rules that previously “slammed New Jersey auto accident victims with up to $250,000 in medical bills” for accidents that were not the victim’s fault. The law is designed to help those who purchase cheaper auto insurance plans that can leave them with insurmountable amounts of debt in the event of a car accident.

In addition to a comprehensive $250,000 personal injury protection plan that comes with most New Jersey car insurance policies, the state also permits a less expensive option that only covers up to $15,000 in personal injury protection. While this option can be a less costly month-to-month alternative, it can set drivers back tens of thousands of dollars even if they are not at fault for their accident.

The legal action has been inspired by the story of 27-year-old Josh Haines, a New Jersey resident who was saddled with tens of thousands of dollars in debt after a car accident he was involved in eight years ago. According to Josh, “’I’m left in the dark … this was eight years ago and it’s still setting me back.’” In 2011, Josh was driving from Camden County Community College when he was struck by a vehicle that was hydroplaning. His medical bills totaled $30,000, which is nearly double what his less-expensive insurance plan covered.

END_OF_DOCUMENT_TOKEN_TO_BE_REPLACED

Slip and fall cases are some of the most complex personal injury cases to litigate due a variety of compounding factors. For one, the plaintiff must be able to attribute their fall to the place of business’ negligence. This is particularly difficult to prove, considering that in order to assert the business owner’s negligence, there must be proof that they had previous knowledge of faulty conditions and did not make adjustments accordingly. 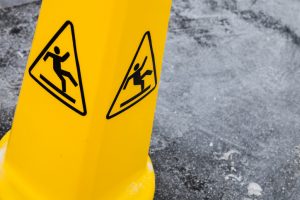 Slip and fall cases are often difficult to litigate due to burden of proving negligence.