If you are entering a New Jersey marriage, it may be wise to consider a pre-nuptial agreement before officially tying the knot.

What is a Prenuptial Agreement?

END_OF_DOCUMENT_TOKEN_TO_BE_REPLACED

If you and your spouse have decided to divorce, your instinct might be to move. Maybe you want to avoid the arguing and bickering that contributed to the breakup of your marriage. If you were the one who initiated the divorce, you might want to alleviate your spouse’s discomfort of having you remain in the house. However, leaving your family home before your divorce is final may not be in your best interests.

Can a Spouse Force the Other to Leave the Family Home?

In a New Jersey divorce, neither spouse has the right to force the other to move out before the divorce is final. Once you are married, both spouses have equal rights to reside in the house until the marriage is dissolved.

END_OF_DOCUMENT_TOKEN_TO_BE_REPLACED

For many couples, retirement accounts represent a major portion of their marital assets. Most depend upon the availability of these funds in order to meet their needs in their later years. When a New Jersey couple divorces, the laws governing how retirement assets are treated can be complicated. A New Jersey divorce attorney with experience in high-asset issues can help you understand which part of your or your spouse’s retirement assets are subject to equitable distribution and what is necessary in order to protect your share of those assets.

New Jersey is an equitable distribution state. That means that when a couple divorces, marital property is divided equitably, or fairly, but not necessarily equally. In general, retirement assets are subject to equitable distribution. However, contributions made before the marriage took place or after a divorce complaint is filed may be excluded. This also applies to any interest earned on these contributions.

END_OF_DOCUMENT_TOKEN_TO_BE_REPLACED

Recording star Mariah Carey’s Australian billionaire fiancé recently broke their engagement. One question immediately asked was, “What will happen to the 10-million-dollar engagement ring James Packer had given her?”

As of now, Mariah has refused to return it. Legally speaking, however, the answer is “that depends.” Although Mariah and James had discussed a prenuptial agreement, none had been signed. Without proof that the ring was an outright gift with “no strings attached,” whether or not the ring has to be given back depends upon the state whose laws will govern.

Engagement rings are generally considered by the courts to be conditional gifts. In other words, it is assumed that the ring is given with the expectation that a marriage will take place. However, laws regarding whether or not the ring must be returned if the giver wants it back after the couple breaks up vary from state to state.

END_OF_DOCUMENT_TOKEN_TO_BE_REPLACED 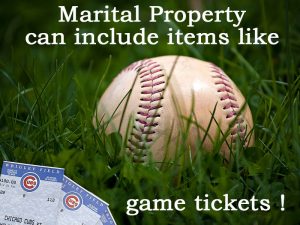 The Associated Press has reported that the wife in an Illinois divorce case—Nancy Riddle v. John Riddle—filed an emergency petition with the court. What was the emergency? The emergency was that her soon-to-be ex-husband had tickets to the Chicago Cubs against the Cleveland Indians in Game 5 of the World Series. He planned to take their 12-year-old son to the game. Both John and Nancy were loyal Cubs fans.

Nancy Riddle held that the situation was an emergency because the Cubs had not taken part in a World Series in 71 years, and if she did not get to see them now, it was likely that she would never have another opportunity.