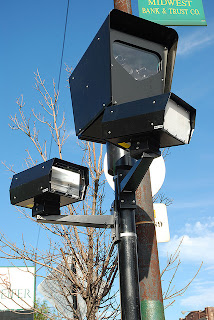 More bad news for those concerned about their privacy conflicting with local and national security efforts.
State and local police departments nationwide have been quietly tracking the movements of every vehicle with a license plate.
Automated Scanners Monito Moving and Parked Cars
Automated scanners affixed to police cars, bridges or buildings take pictures of passing or parked cars, noting their location. The information is collected on every vehicle in the area, regardless of who owns it and whether that person has done anything wrong. The information is held by law enforcement sometimes for years.
All this information was revealed in a study published earlier this week by the American Civil Liberties Union. The civil rights group wants police departments to get rid of any records of cars not linked to a crime.
ACLU Steps In
“There’s just a fundamental question of whether we’re going to live in a society where these dragnet surveillance systems become routine,” ACLU staff attorney Catherine Crump told the Associated Press.
Law enforcement agencies say the scanners are helping them nab criminals, not monitor the activities of ordinary residents. They point out that the scanners allow them to track suspicious cars, and help with drug busts and abducted children. They also note that the technology is legal in most cases.
ACLU Says No Laws to Regulate Scanners
But the ACLU says that only five states have laws regarding license plate e-readers. These do not include states like New Jersey, where Jersey City collected about 10 million images of cars in a city with a population of 250,000.
In the report, the ACLU also questioned the relatively small number of hits, about 1 in 500, for suspicious vehicles in Maryland. Most hits were for suspended or revoked registration, or a violation of the state’s emissions inspection program.
Other Controversial Programs
This latest news comes to light after a string of revelations that law enforcement agencies have been collecting personal information from millions of ordinary people, including DNA samples and driver’s licenses.
Last month, the Washington Post reported that the faces of more than 120 million people are contained in photo databases that police are increasingly relying on to help them identify suspects, witnesses and other bystanders.
About a couple months ago, the Supreme Court cleared the way for law enforcement officials to collect DNA samples from suspects they arrest for investigation of serious crimes.
As it turns out, many state officials were already compiling their own statewide DNA sample databases to help them in their crime-fighting efforts. These have all come to light just as we have now discovered that the National Security Agency has been aiming some of its top-secret surveillance programs on ordinary Americans.
Photo credit: Tripp