On Wednesday, Paul Frischer, 59, from Franklin Lakes was arrested and charged for allegedly hitting a pedestrian in Garfield with his SUV and leaving the scene of the accident.

As reported in the Bergen Record, Mr. Frischer was charged with leaving the scene of an accident resulting in death, endangering and injured victim, leaving the scene of a motor vehicle crash and failure to report a motor vehicle crash. The Bergen County Prosecutor’s Office revealed that Mr. Frischer, a building superintendent, was charged in the hit and run accident on Monday that killed Giovanni Rivera, age 42.  Mr. Rivera was hit at approximately 7:00 p.m. om Monday evening and was left lying in the street on MacArthur Ave. in Garfield. He passed away at Hackensack University Medical Center on Wednesday morning.  The accident occurred near a special needs group home in Garfield. A funeral is scheduled on Saturday in North Bergen.

Mr. Frischer was apprehended as the result of authorities releasing photographs of a dark colored 1999 Chevrolet Suburban allegedly driven by him at the time of the incident.  He was scheduled to appear in Court this morning.

In New Jersey, leaving the scene of an accident resulting in death is a criminal offense and the person charged faces penalties including suspension of driver’s license, hefty fines and even jail.  The possible fines range from $2,500.00 to $5,000.00.  Jail may be up to six months.  The driver’s license suspension can be up to a year for a first time offender and could be a lifetime suspension for a second or third offense.

A violation of NJSA 2C:12-1.2 Endangering an injured victim is a third degree crime. A person is guilty of this offense if he causes bodily injury to a person and leaves the scene of the injury knowing or reasonably believing that the injured person is physically helpless, mentally incapacitated or otherwise unable to care for himself.

Leaving the scene of a motor vehicle crash is a traffic offense in New Jersey and carries with it a mandatory driver’s license suspension of up to six months. Fines range from $200.00 to $400.00 and/or jail up to thirty days.

Failure to report a motor vehicle crash is a traffic offense in New Jersey. The penalties are less severe as compared to leaving the scene of an accident.  A driver involved in a crash in New Jersey that results in personal injury or property damage in excess of $500.00 must notify the police of the accident.  Failure to do so will result in a fine between $32.00 and $102.00.  This offense carries no motor vehicle points.  Often times through plea bargaining, the prosecutor will agree to downgrade a leaving the scene of an accident ticket to a failure to report an accident violation. 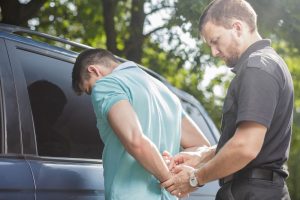