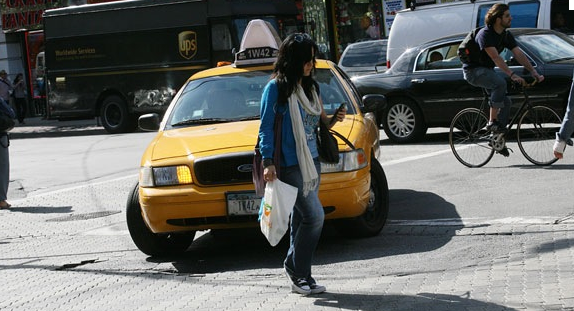 In what could easily be characterized as a perfect example of media histeria over a botched analysis, Fort Lee, NJ, became the talk of the nation.  The reporting headlined what was supposedly a decision by the police in Fort Lee to start ticketing folks for texting while walking.  The press even pointed to examples of pedestrians who had been fined $85 for so doing.
When the smoke cleared, the truth was that nothing had really changed other than an emphasis.  The Fort Lee Police were looking very hard at those who were jaywalking, and IF they were also texting they were more likely to get a ticket.
But is there a time in the future when texting while walking will be cause for a ticket in New Jersey.  It could easily happen.  Bills have been offered to accomplish that result in New Jersey, but have not yet been passed.  Should there be such laws?
There is certainly plenty of science to show us that the risks to health, posture, life, and limb are significant for those who are inclined to walk head down, eyes on screen.

According to a report compiled by n 2004, an estimated 559 pedestrians were treated in emergency rooms for injuries received while using a cell phone.  That number dropped to 256 in 2005, but has risen every year since then.  Meanwhile, the total number of pedestrians estimated to be treated in emergency rooms dropped from 97,000 in 2004 to 41,000 in 2010.
If you have been involved in any type of accident where texting or the use of a cell phone caused or contributed to the accident, and you believe that you are due compensation, call the New Jersey personal injury attorneys at Aretsky and Aretsky, Attorneys at Law – 201-580-3411.