Half of Teens Surveyed Said They Text While Driving 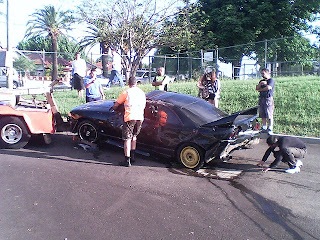 A new study published last week says that teens who text while driving are more likely not to be wearing a seat belt, ride with a driver who’s been drinking, or to drink and drive themselves.
That’s not all. About half of teen-agers surveyed admitted to texting while driving.
All of these factors suggest that teens may be placing themselves at a substantially higher risk than previously thought.
Motor Vehicle Crashes Leading Cause of Death for Teens
As it is, the leading cause of death among teens ages 16 to 19 are motor vehicle crashes, killing about 3,000 teens a year.
Researchers applauded efforts such as graduated licenses for teen-agers (limited driving rights for younger teens) but said the most effective preventative strategies start with parents. They say parents should forbid their teen-agers from texting while driving, and set forth a strong example by not texting while driving themselves.
The Centers for Disease Control and Prevention has compiled a comprehensive list of things parents can do, including providing their teen with a parent-teen driving agreement.
In New Jersey, teens receive graduated driver’s license based on their age under the Graduated Driver License Program.

The program restricts the hours that the teen can drive to 5 a.m. to 11 p.m., passengers to just one unless they are accompanied by a parent or the passengers are the teen’s dependents, cell phone use, and plea-bargaining any offense that carries points. For more information on the latest bills regarding teen driving, go here.
The study was published online this week in Pediatrics, the journal of the American Academy of Pediatrics.
Researchers used data from the 2011 national Youth Risk Behavior Survey conducted by the Centers for Disease Control and Prevention. The survey assessed the driving-texting behavior among 8,505 students ages 16 years old and up.
You can find the study here.
Photo credit: Highway Patrol Images