Some local law enforcement agencies nationwide are compiling their own databases of DNA samples collected from suspected criminals and innocent people, according to an article in The New York Times. 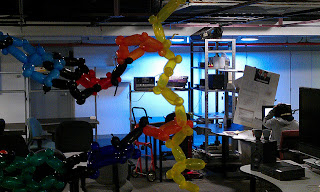 The article in the New York Times yesterday detailed how several law enforcement agencies around the country have been compiling databases of DNA samples of everyone from detainees who are later cleared of charges to people who have fallen prey to criminals. These agencies say they don’t want to wait for federal databases. In some instances, the DNA samples they’re collecting don’t meet federal regulations to be included in the federal database.
Crime victims’ samples
“If an officer goes to your house on a burglary, they will swab a door handle and then they will ask, ‘Can we get a sample from the homeowner so we can eliminate them as the source?’ ” Doug Muldoon, police chief of Palm Bay told The New York Times. “They say, ‘Sure.’ ”
The news has come to light just a week after the Supreme Court said it’s OK for law enforcement to collect DNA samples of people arrested for investigation of serious crimes. The Supreme Court, however, was obviously torn in their 5-4 ruling, which likened DNA samples to fingerprints.
Supreme Court dissenting opinion
A dissenting opinion written by Justice Antonin Scalia mentioned the chilling effect that such a ruling could have, specifically mentioning the possibility that DNA samples of innocent people could be collected.
On the one hand, DNA samples are a valuable tool for law enforcement to solve crimes and clear innocent people who have been convicted of crimes, especially in cases that are several decades old. But opening the door to collecting DNA samples could be opening the door to a Pandora’s Box of problems.
Potential Fourth Amendment Violations
Supreme Court justices in the dissenting opinion voiced concerns over violations of the Fourth Amendment, which protects Americans against unreasonable searches and wondered how far public officials will go in collecting DNA samples:
“Today’s judgment will, to be sure, have the beneficial effect of solving more crimes; then again, so would the taking of DNA samples from anyone who flies on an airplane (surely the Transportation Security Administration needs to know the “identity” of the flying public), applies for a driver’s license, or attends a public school.”
Privacy Concerns
The case decided by the Supreme Court, Maryland v. King, involved a Maryland man whose DNA was collected during his arrest for assault. His DNA was later found to match that found at a the scene of a burglary and rape a few years earlier, and he was convicted.
Many Americans are becoming increasingly worried about their privacy being violated, especially after the news that the government has secretly been keeping tabs on people’s phone and Internet usage.
What do you think? Do you think it’s OK for law enforcement to collect the DNA samples of suspected criminals and their victims?
Photo credit: Nate Matias