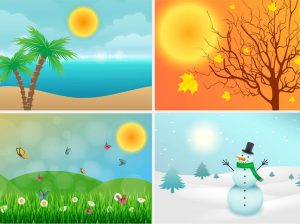 Research conducted by University of Washington sociologists suggests that there are.

Trending in the news are the results of a study conducted by associate professor at the University of Washington Julie Brines and doctoral candidate Brian Serafini. They presented their findings at the Annual Meeting of the American Sociological Association in Seattle, Washington.

The study was based on statistics regarding the number of filings in the state of Washington from 2001 and 2015. Two of the 39 counties were not included because divorce by mail is allowed in those states.

The team found that each year the increase in the number of filings spiked in January and peaked in March. They cited a second spike that began in July and peaked in August. The two reported, however, that there was a variation in their findings during the recession that began in 2008.

Reasons for the Spikes
The following summarizes the factors Brines and Serafini offered to explain the peaks:

• Thanksgiving, Christmas, and New Year’s culturally important holidays;
therefore, it is considered inappropriate to file during this season.

• The holidays may bring false expectations that things will improve.

• When those expectations are not met, the let down and disillusionment
make matters worse.

• Holidays can be very stressful; the stressful situations can lead to the
exposure of problems and feelings that have been suppressed.

• The beginning of a new year might encourage the hope for a new start,
but the change does not occur.

Brines suggested that the spike begins in January following the holidays but doesn’t peak until March because people need time to get their finances in order, choose a divorce lawyer, or muster the courage to act on their decision.

• Like the winter holidays, summer vacations can also be stressful for some.

• The one filing might decide not to ruin the children’s summer fun by filing
for divorce during their vacation; on the other hand, they want to do it
before the start of a new term in school.

Differences Between Washington and New Jersey Divorce Laws
There are many differences between the divorce laws of New Jersey and the laws governing the dissolution of a marriage in Washington State.

New Jersey
To file for divorce in New Jersey the following requirements must be met:

• One spouse must have been a resident for the state for at least one year;
however, there is one exception.

• If adultery is the ground for divorce, one party must be a resident of NJ;
however, there is no time requirement.

• The complaint must be filed in a NJ county in which one spouse lives.

• There are several fault grounds on which to base the complaint.

• There are two no-fault grounds:
• an 18-month separation and
• irreconcilable differences

• The parties are required to appear in court.

• The Court decides whether to grant the divorce.

Washington State
It is much easier to file for divorce in the state of Washington than in New Jersey. In Washington, if all of these requirements are met, then the Court will grant the dissolution of the marriage:

• One spouse has to be a resident of the state and must plan to stay.

• One of the parities must file and serve the petition properly.

Would the Findings of This Study Hold True in Other States?

In an effort to determine whether their findings relate to other states, Brines and Serafini have begun to look at Ohio, Minnesota, Florida, and Arizona. These states, the researchers noted, have similar divorce laws; however, they differ demographically and economically. Their initial findings were in line with those of their study.

There are many reasons why one might decide to postpone filing for divorce; for example, often there are important tax consequences to consider. In the opinion of these sociologists, an overriding reason for the spikes and peaks is that they follow periods of time in which high expectations are followed by disappointment and disillusionment.