The New Jersey traffic laws may seem silly to you, but they are in place for a reason: mainly, your safety and the safety of others. 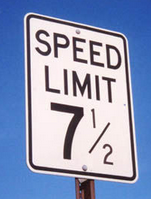 Most people do not give much thought to receiving a speeding ticket.  Even though you know you shouldn’t be speeding, we have all been guilty of justifying our need to break the rules:

You probably felt inconvenienced by being pulled over, and figure all you need to do now is pay for it and move on.  But is that all there is to it?  No.  People often don’t realize the long lasting effects a moving violation can have on a person’s:

In addition to the ticket fine you will be required to pay, you probably already know that getting a moving violation will get points on your driving record, which will end up causing your auto insurance rates to jump up.  In tough economic times we’re facing today, every penny counts, so why wouldn’t you take the opportunity to have someone to represent you in this matter?
You may have never even considered contacting a traffic lawyer before, and assumed that everyone just goes to court on their own.  At Aretsky & Aretsky in Bergen County, our traffic defense lawyers have extensive knowledge and experience of traffic laws that everyday citizens know nothing about.
While paying a little extra each month on your auto insurance may not really bother you too much, consider the effect this traffic ticket could have on your driving record.  According to the New Jersey DMV website:
“A certified driver history record abstract lists all accidents, violations and actions (including, but not limited to suspensions, points credits, fee payments and restorations) incurred by a motorist.”
Since this is a public document, anyone can access your driving history.  And do you know who cares about your traffic violations?  Present and future employers – especially if the job you hold or are seeking requires any work hours behind the wheel.  In addition, if you are ever in a legal trial of any kind, lawyers can access this document and use any of the information against you.
And what if you live here illegally?  In a recent article on NJ.com, it was reported that in New Jersey alone, illegal immigrants without a criminal record are more likely to get deported compared to the rest of the U.S.  This same article reported that one man who lived and worked here illegally was driving with a suspended license, without any prior criminal record and was facing deportation.
These are major issues that do not need to be dealt with on your own.  Contact the law offices of Aretsky & Aretsky at 201-445-5856 or email us today for a free consultation.  Let us hear the details of your particular situation, and we’ll come up with a plan together.
You will also want to read New Jersey Driving and Texting Law Update 2013.